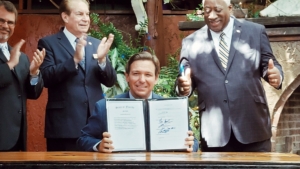 Governor DeSantis signed the state budget for fiscal year 2021-2022. The budget totaled $101.5 billion and includes $169 million in tax relief. The Governor vetoed $1.5 billion in total spending, including $1.35 billion from federal funds received under the American Rescue Plan Act of 2021.

“While other states advocated for never-ending lockdowns during the pandemic, Florida followed the science and led the nation in ensuring there were opportunities for Florida families to go to school, go to work, and provide for themselves and their families,” Governor DeSantis said.

The Florida Leads budget exemplifies Florida’s continued resolve and powerful economic foundation. It establishes Florida’s position as a nationwide leader in education, protecting the environment, creating a resilient economy, and ensuring public safety. And it accomplishes all of this while maintaining strong fiscal reserves and lowering taxes to make sure Florida families benefit this year and for decades to come.

This was done through the close work and cooperation of the Governor, Senate President Wilton Simpson and House Speaker Chris Sprowls.

Highlights of the new budget include:

Republican leaders and Governor DeSantis are protecting women and girls from being unfairly and dangerously forced to compete against biological boys in sporting events. Governor DeSantis signed SB 1028 creating the “Fairness in Women’s Sports Act,” preserving fair opportunities for female athletes to demonstrate their skills in athletic competition.

Any athletic team or sport that is designated for females may not be open to students of the male sex, based on the student’s biological sex listed on the student’s official birth certificate. The law applies the requirements to interscholastic, intercollegiate, intramural, or club athletic teams or sports that are sponsored by public schools, colleges, or universities.

This is a popular law. Multiple polls have shown that 60 to 70 percent of Americans believe that biological males should not be participating in women’s sports.

“As a father of two daughters, I want my girls, and every girl in Florida, to compete on an even playing field for the opportunities available to young women in sports,” Governor DeSantis said. “Women have fought for decades to have equal opportunities in athletics, and we have to prevent those opportunities from being eroded as is happening in other states. It’s common sense. Many thanks to Senator Stargel and Representative Tuck for their thoughtful work on this bill to ensure fairness in women’s sports.”

Cheaper prescription drugs may be on the way to Floridians struggling with ever-increasing health care costs.

At the direction of Governor DeSantis, the Florida Agency for Health Care Administration filed an Amicus brief in support of the U.S. Department of Health and Human Services’ final rule implementing Section 804 of the Federal Food, Drug and Cosmetic Act, to facilitate the importation of prescription drugs, based in part off Florida’s 2019 importation concept paper.

In 2019, at President Donald Trump’s direction, HHS was tasked to work diligently with Florida to fully implement provisions of the 2003 Medicare Prescription Drug, Improvement, and Modernization Act related to the importation of Canadian prescription drugs.

“Today’s filing reinforces Florida’s position — that the lawsuit is another desperate attempt by Big Pharma to prevent the importation of safe and effective prescription drugs from Canada,” Governor DeSantis said.“Floridians have been waiting long enough for lower prescription drug prices, and it is unnecessary to keep them waiting. I look forward to the dismissal of the suit and the immediate approval of Florida’s plan by the federal government.”

The Biden administration subsequent to the filing signalled that it will agree to Florida’s efforts.

An awesome documentary of Governor DeSantis’ principled leadership through the Covid pandemic has been produced by the Epoch Times and American Thought Leaders. It’s a behind-the-scenes look in the words of Governor DeSantis, his advisors and others that the mainstream media would never dream of doing.

AG Ashley Moody is fighting for Florida jobs and the nation’s energy independence by challenging President Joe Biden’s unlawful executive order that cancelled construction of the Keystone XL Pipeline. The AG is joining attorneys general from 22 states in an amended complaint in the U.S. District Court for the Southern District of Texas to block Biden’s unconstitutional and unlawful attempt to cancel the Keystone Pipeline.

Moody said, “Minutes after taking the oath of office, President Biden signed an unlawful executive order reversing an Act of Congress and eliminating Florida jobs. His order, halting construction of the Keystone Pipeline, is not only a jobs killer, it risks our nation’s energy independence and national security — we all saw last month how quickly losing access to just one pipeline can cause chaos and uncertainty in a large portion of our country.

“I recently met with Congressman Neal Dunn, who has been speaking with Floridians in his district who lost work because of Biden’s reckless order. We must help these Floridians get back to work.”

Nikki Fried finally made official what she has been doing unofficially at taxpayer expense for two-and-a-half years — running for Governor. She’s been wrong on virtually every issue of the past two years, and politicized them for her own personal political enrichment. She faces charlatan Charlie Crist, who has been a member of three parties in the past 10 years in desperate attempts to win an office.

“Nikki Fried is conspiracy-spouting lockdown zealot who has accomplished absolutely nothing while in office.  Instead of working for the people of Florida, Fried spends her time pushing partisan lies on social media.  Her claim to fame is wasting tax dollars to plaster her face on gas pumps and cash registers across Florida.  Rather than seek a promotion, she should refund her taxpayer-funded salary to atone for the complete waste her tenure in office has been.”

And now we find out that Fried “accidentally” forgot to include $350,480 in her 2018 tax filings. She amended her filing May 28, just days before announcing her run for governor.

The Economic of Clean Water
Scroll to top