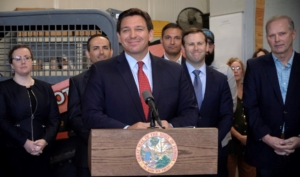 Governor DeSantis, Speaker Chris Sprowls and Senate President Wilton Simpson announced the legislative agenda for the special session of the Florida Legislature that will begin Monday to protect Florida jobs.

“No cop, no firefighter, no nurse, nobody should be losing their job because of these jabs – we must stand up for people and protect their jobs and livelihoods,” Governor DeSantis said. “What the federal government is doing is wrong. It is wrong to kick people out of work; it is wrong to try to micromanage businesses; and it is wrong to deprive key industries of people that we need. Most importantly, what they are doing is unconstitutional and we have a responsibility to stand up for the Constitution and protect Floridians.”

Prohibiting private employer COVID-19 vaccine mandates. If employers do have a vaccine policy, they must offer the following exemptions to employees:

Senate President Simpson said: “As a parent and grandparent, I continue to be dismayed at school district bureaucrats who think they know better than parents. Enough is enough. Our legislation to keep Florida free inserts some common-sense and clarity into the chaos we have seen in Washington by giving workers more options to stay safe on the job and honoring the rights and responsibilities of parents.”

Governor DeSantis announced his education budget proposals that will invest record funding in Florida’s public schools. The proposal includes a second consecutive year of $1,000 bonuses for Florida’s teachers and principals; $600 million to raise minimum teacher salaries for the third year in a row from $40,000 to $47,500 over those three years; and the highest per-student funding in Florida’s history at $8,000 per student.

“Since day one, I have been focused on making Florida a leader in education, and I am proud to announce my proposals to invest record funding into our education system over the next year,” Governor DeSantis said. “By continuing to boost teacher pay, give bonuses to principals and teachers, prioritize workforce education, foster a strong civics curriculum, and replace the FSA with progress monitoring, we’re making a significant difference in the lives of our students.”

Here are some of the highlights:

In yet another victory for parents’ rights, the Florida Division of Administrative Hearings dismissed a case filed by six school districts who have disregarded the will of parents to make decisions for their children.

The Administrative Law Judge ruled that the Florida Department of Health had the legal authority to issue an emergency rule that empowers parents to decide if their children should wear masks at school and ensures healthy students can remain in school. This ruling follows an opinion issued by the First District Court of Appeals on October 29, which stated that School Districts “cannot stand between parents and their lawful right to make decisions on behalf of their children.” The courts are becoming crystal clear that parental rights to make decisions for their children’s health supersede school districts’ policies.

“There is no strong evidence of health benefits for children as a result of mask mandates in schools. The rights of parents continue to be protected in Florida, as we can see by this tremendous decision,” said Surgeon General Dr. Joseph Ladapo. “Florida will not make decisions out of fear, but rather out of close analysis of the data.”

“When you break the law there are consequences,” said Commissioner Richard Corcoran. “If these districts continue to break the law, we plan to fully hold them accountable.”

Since the ruling Friday, several school districts have withdrawn their mask mandates for children.

A federal appeals court on Saturday temporarily halted the Biden administration’s vaccine mandate for businesses with 100 or more workers.

The 5th U.S. Circuit Court of Appeals granted an emergency stay of the requirement by the federal Occupational Safety and Health Administration that those workers be vaccinated by January 4 or face mask requirements and weekly tests.

Governor DeSantis called a special session of the Florida Legislature starting Monday to pass new laws that would block this unconstitutional overreach by the federal government. (See top story.) This court ruling is a temporary win, but Floridians need laws in place to protect them.

“The remarkable ease at which this president will abandon the rule of law and separation of powers is astonishing and devastating to the autonomy of American workers,” said Attorney General Ashley Moody. “For this reason, I will take swift legal action to stop this unprecedented overreach by the federal government — to protect Florida and our workers from the unlawful edicts emanating from President Biden and his handlers.

Governor DeSantis announced $481 million for 103 wastewater and springs projects. The projects will improve water quality in water bodies across Florida, reducing total nitrogen loading by a combined 700,000 pounds per year.

“These awards are going to make a big difference for our world-renowned springs and water quality all throughout the state of Florida,” Governor DeSantis said. “Florida’s water resources are what our economy runs on – they are an economic driver, but even apart from that, our environment is really integral to what these communities are all about. We’re blessed to have it and we have a responsibility to leave it better than we found it.”

Governor DeSantis announced the launch of First Lady Casey DeSantis’ statewide anti-drug abuse initiative: The Facts. Your Future. This program directly engages youth in Florida to improve their understanding of the life-altering effects of drug abuse and empowers teens to reach their full potential. Through a series of school assemblies, the program will provide an interactive space for schools to educate their students on the consequential impacts of substance abuse.

“Substance abuse is one the major reasons some of our youth fail to reach their true potential,” Governor DeSantis said. “As the First Lady continues to advocate and support Florida’s youth, this new initiative is another key step to protect and educate our children. We must ensure teens across our state have the tools and knowledge to make good decisions that will positively impact the rest of their lives.”

“The Facts. Your Future empowers Florida students with the facts needed to make informed decisions for their future,” First Lady Casey DeSantis said. “The earlier teens start using drugs, the greater their chances of continuing to use them and developing substance abuse problems later in life.”

“These fundraising solicitations, which were paid for by non-federal funds, represent an illegal use of non-federal (or ‘soft’) funds to raise money for a candidate for federal office,” the complaint reads. “As such, Representative Demings’ campaign has accepted an in-kind contribution and thereby violated the federal soft money ban.

“Demings hitched her wagon to one of the biggest opponents of parent involvement in education, and she appears to have broken the law in the process. As Demings said herself, ‘Nobody is above the law.’ Demings and her campaign must comply with any investigation that follows from these claims,” said Elizabeth Gregory, communications director for Marco Rubio for Senate.

Americans have seen enough of the Biden’s unmake America agenda

A USA Today/Suffolk University Poll reveals devastating poll numbers for the Biden/Harris administration. According to reporting from USA Today:

“A year before the 2022 midterm elections, Republicans hold a clear lead on the congressional ballot as President Joe Biden’s approval rating sinks to a new low of 38%.

“A USA TODAY/Suffolk University Poll, taken Wednesday through Friday, found that Biden’s support cratered among the independent voters who delivered his margin of victory over President Donald Trump one year ago.”

The poll found that:

In fact, Biden’s endorsement would be much less valuable in a state or local election than would be an endorsement from former President Donald Trump, especially with independent voters.

The shocking poll indicates that Biden’s rapidly sinking popularity has now become a political liability for the Democratic Party as a whole and could prove to be a major factor in the upcoming 2022 midterm elections.

Governor DeSantis introduced new policy items he hopes to pass in the upcoming...

Freedom Thursday – Christian Judeo Foundation of our Country and Our ...
Scroll to top