Planning for red tide is paying off

Governor DeSantis’ environmental foresight and commitment are paying off for Floridians as the state is prepared for the red tide growing off the Gulf Coast. The Governor, working with the Republican Legislature, allocated millions for red tide and blue-green algae in this year’s budget because they understand that these are long-term issues that also require rapid responses at times.

And because of that foresight, any state of emergency, as is being urged by some Democrats, would actually hurt Gulf Coast business and affected communities — and perhaps businesses statewide — by scaring away tourists and vacationers. We’ve seen it happen before in crises as the entire state gets painted as having a problem.

“Literally the only thing that would do is hurt some of these people,” the Governor said of declaring a state of emergency. Watch the clip HERE. 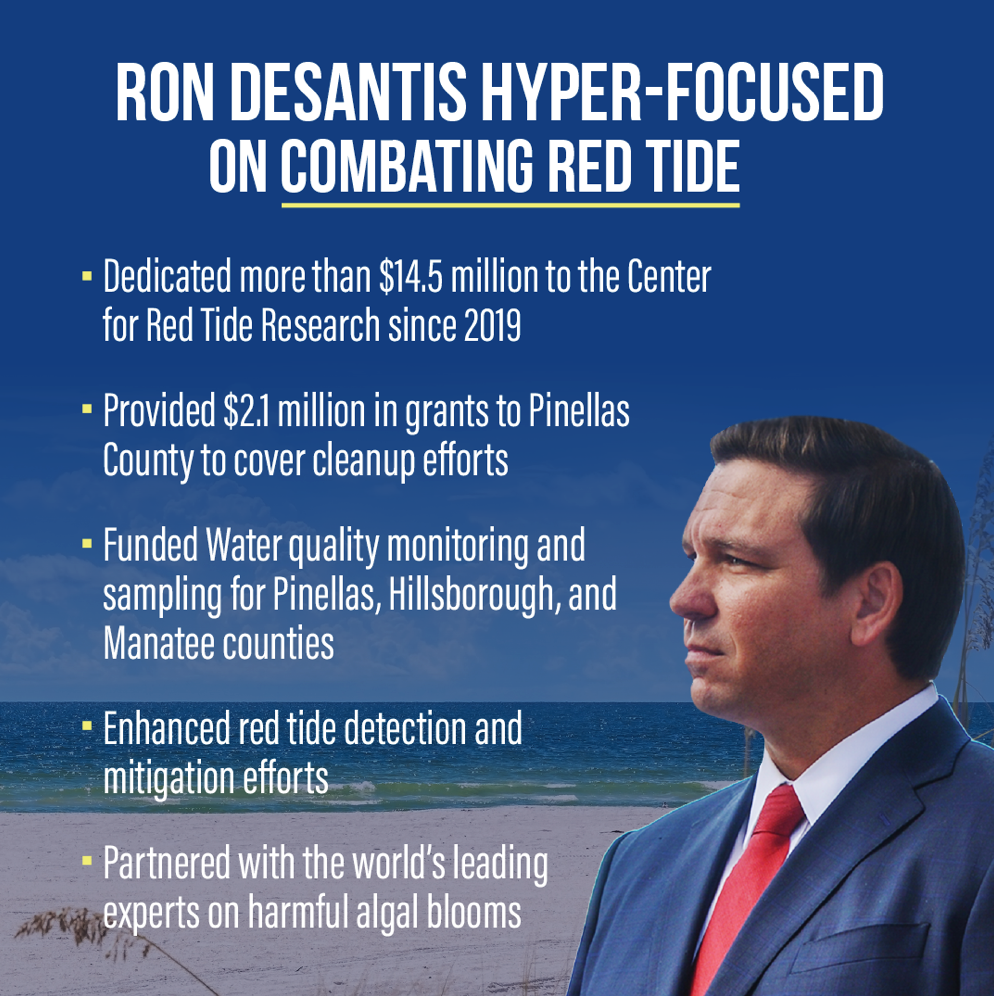 The focus of the town hall was Cuba Libra, highlighting the peaceful but giant uprising by the Cuban people determined to create a new government, a new Cuba, that has as its foundation freedom. The coast of Florida is just a few miles from Cuba and America can and should play a key role in helping the Cuban people in their quest to be free. So far, the rudderless Biden White House has been largely missing at this crucial moment.

But Florida leadership, exemplified last night, has been electric in backing the Cuban people and the Cuban Americans in Florida who have poured into the streets in support of a new Cuba.

Governor DeSantis has said Florida companies stand ready to get full internet into Cuba, past the communist government’s efforts to block it, and called on the Biden administration to rapidly approve the action. But President Biden is radio silent on it, reflecting the general confusion in the Democrat Party over how to view this freedom movement in a communist country.

Senator Rubio has been blistering Democrats online and in the well of the Senate, passionately making the case for helping the Cuban people. He is the most important, informed, and persuasive voice in Washington on Cuba, and he is moving the listless apparatus of D.C.

Florida continues to advance childhood education as Governor DeSantis announced that Florida is investing $270 million in literacy initiatives throughout the state during the celebration of the signing of House Bill 3. This means that K-5 students who are reading below grade level can receive quality books at their homes.

“As a father of three young children, I want every child to have the opportunity to achieve their full potential,” said Governor DeSantis. “The biggest difference we can make in setting Florida children up for success is making sure they know how to read.”

To support these efforts, the Florida budget dedicates $300 million specifically to protect the Florida Wildlife Corridor. This funding is in addition to the $100 million that is allocated to the Florida Forever program.

“Today we celebrate another milestone of this year’s legislative session, which was a resounding success for Florida’s environment,” Governor DeSantis said.

The legislation has been roundly applauded by conservation and environmental groups around Florida.

Governor DeSantis said this week he will continue the fight to free the cruise lines from onerous CDC restrictions by asking a federal appeals court to reimpose an injunction that would block restrictions on the cruise-ship industry during the COVID-19 pandemic.

The Governor made the comments after a panel of the 11th U.S. Circuit Court of Appeals upheld CDC restrictions and issued a stay of the injunction. Florida Attorney General Ashley Moody filed a lawsuit in April arguing that the CDC had overstepped, and did not have the legal authority to impose these regulations. In June, a Tampa-based district judge agreed and issued the injunction.

“We are absolutely going to pursue getting the stay removed, either at the full 11th Circuit or at the U.S. Supreme Court,” DeSantis said during an appearance in Central Florida. “I think most courts at this point have had their limit of the CDC issuing these dictates without a firm statutory basis. I am confident we’d win on the merits at the full 11th Circuit, and obviously I am confident we would win at the U.S. Supreme Court.”

ICYMI: In Case You Missed It

Governor DeSantis visited the Southern Border over the weekend to meet with Florida law enforcement officers who have been deployed to Texas to help with the border crisis.

The Governor also met with Texas Governor Abbott for a tour and to receive a briefing on the rise in crime and drug trafficking that Texas is experiencing because of the Biden Administration’s failed border policies. At the briefing, Governor DeSantis announced that the Florida National Guard will remain in Texas to provide additional border support until October 2022.

Florida law enforcement have assisted with the apprehension of more than 2,800 illegal immigrants in 23 days and aided in more than 100 criminal arrests for felonies, including human trafficking, drug smuggling, and stolen vehicles.

“We appreciate Texas stepping up where the federal government won’t,” Governor DeSantis said. “When Governor Abbott put out the call for help at the border, we immediately answered because we know that the success in Texas is America’s success.”

He added: “Of the individuals, our law enforcement have apprehended at the border, more than 70% said they ultimately wanted to go to Florida.”

It’s been a rough week for Val Demings. She has refused to criticize groups like Black Lives Matter and radical leftists such as AOC, who defend the Cuban communist regime and blame the United States for the plight of the people of Cuba.

And then she failed a basic test on an issue that’s hugely important to Florida: whether she supports the Cuba embargo at the very moment the people of Cuba are rising up against the communist regime. After dodging questions and refusing to take a position on the Cuba embargo, she had to send a spokesperson out to clean up her mess.

You would think Val Demings, who wants to move up to the Senate, would be more versed on a topic this important to Floridians. It’s clear that Demings is not ready for primetime.

Even the media sees it: “…it still would seem like someone taking on a Cuban American incumbent should expect questions about the embargo and what she wants the Biden administration to do about the ongoing situation.” – Florida Playbook

That’s the opposite of Senator Marco Rubio, who has shown himself time and again to be a leader in the fight for freedom for the Cuban people. He knows what he believes and is bold in proclaiming it. Just the sort of Senate leader Florida needs. 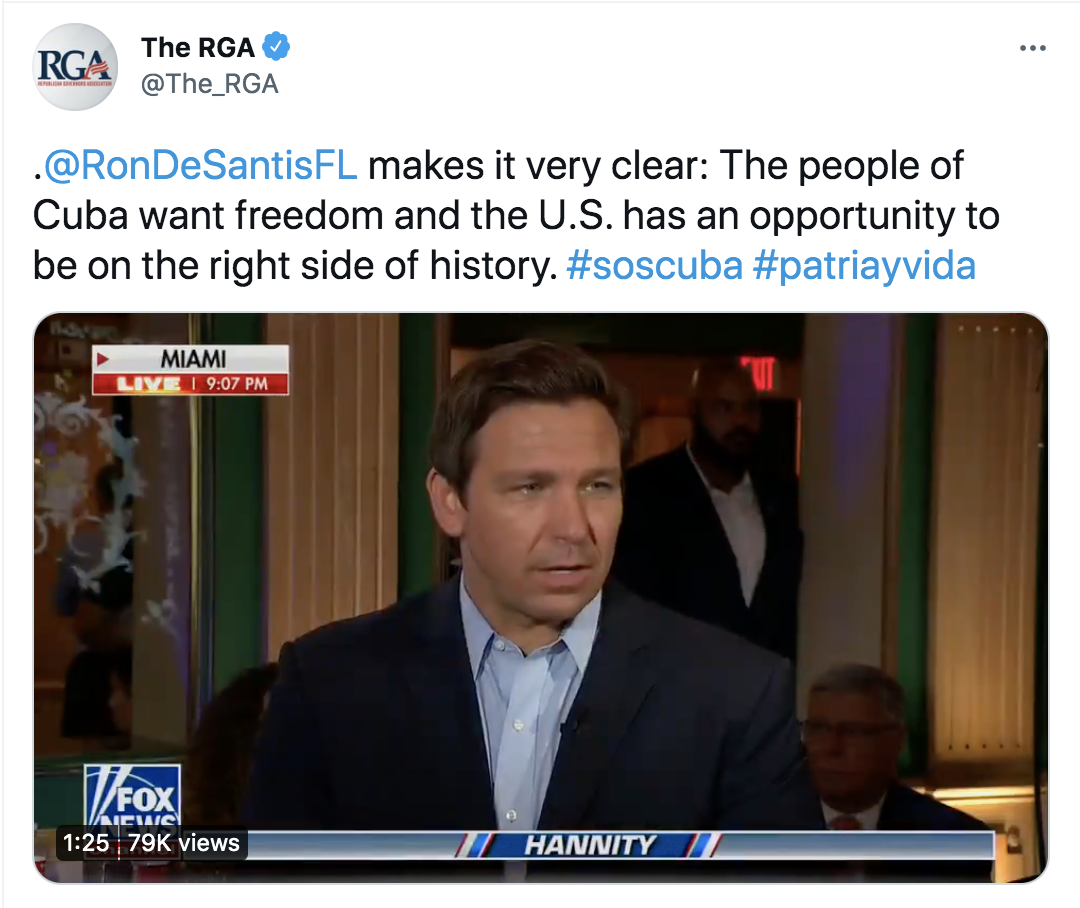 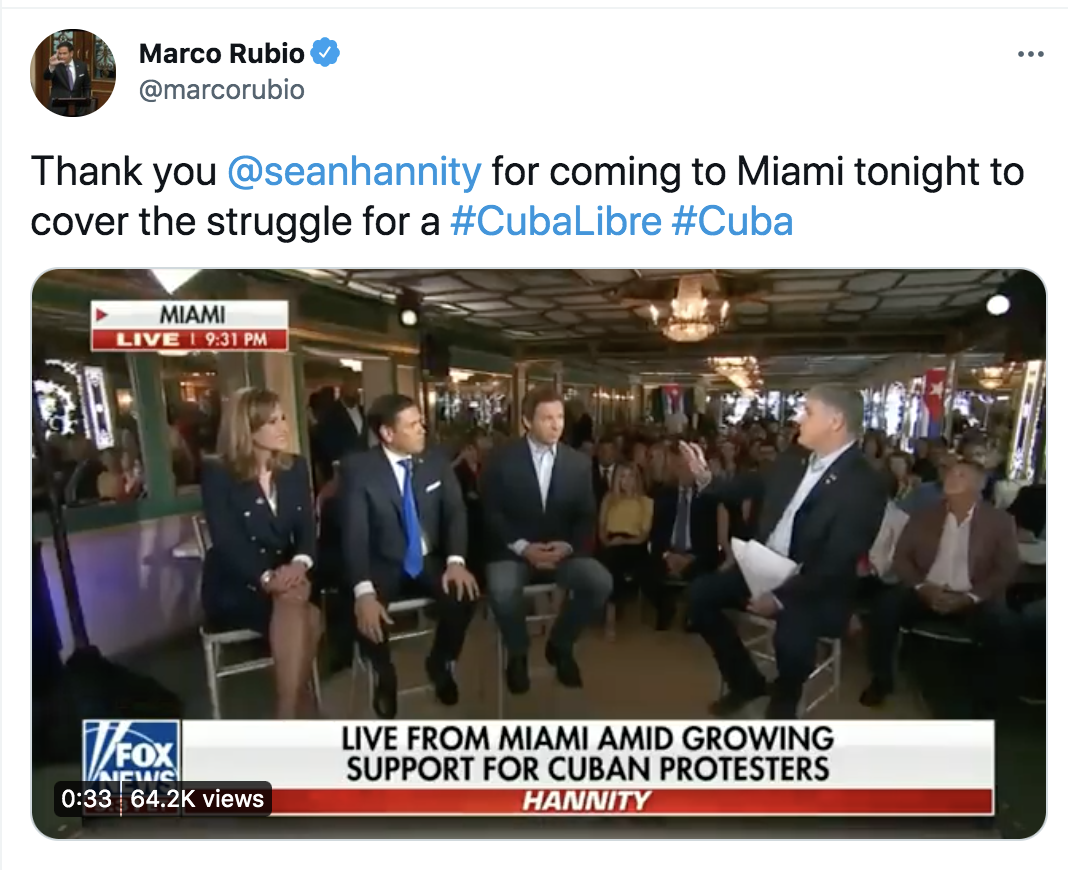 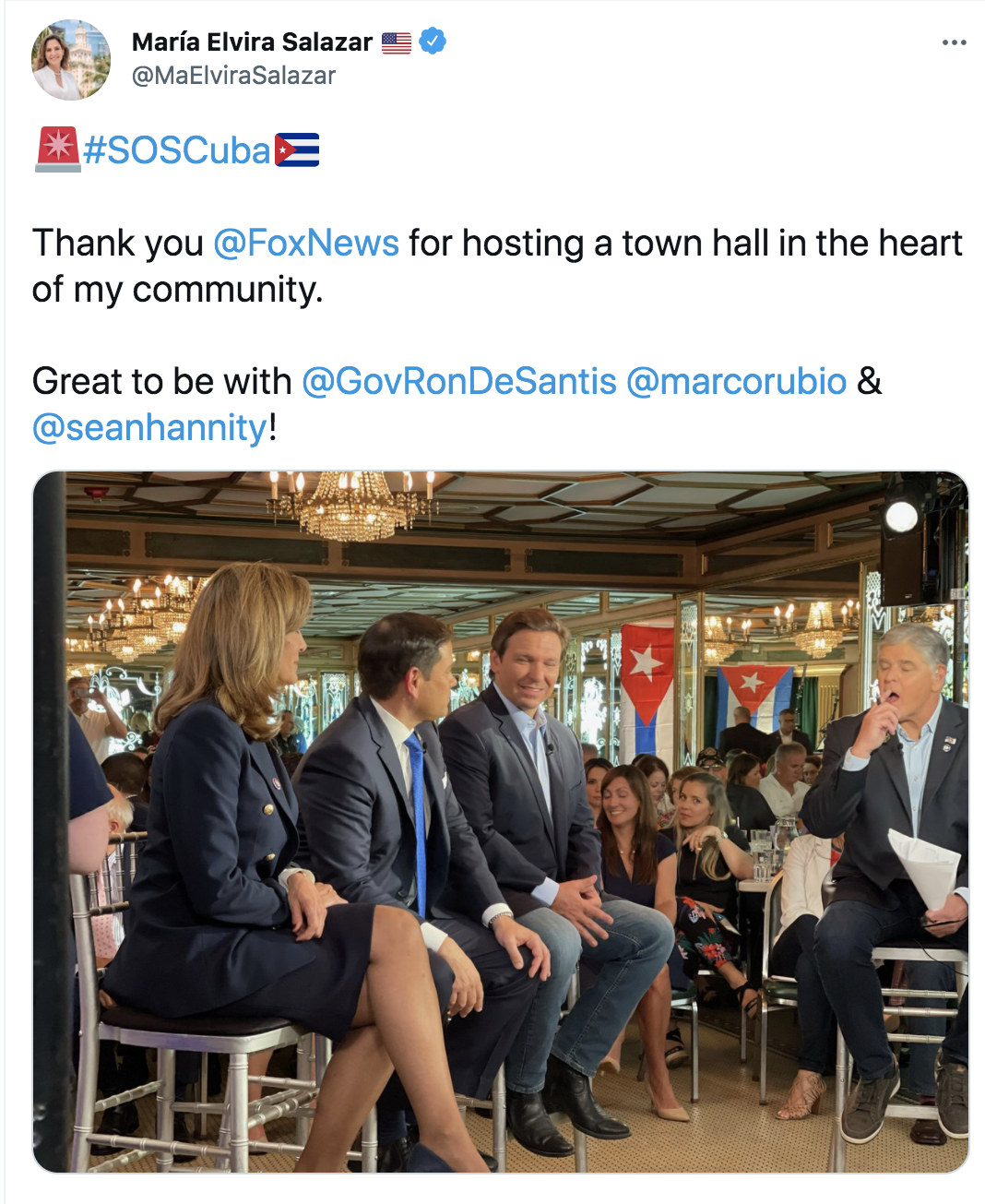 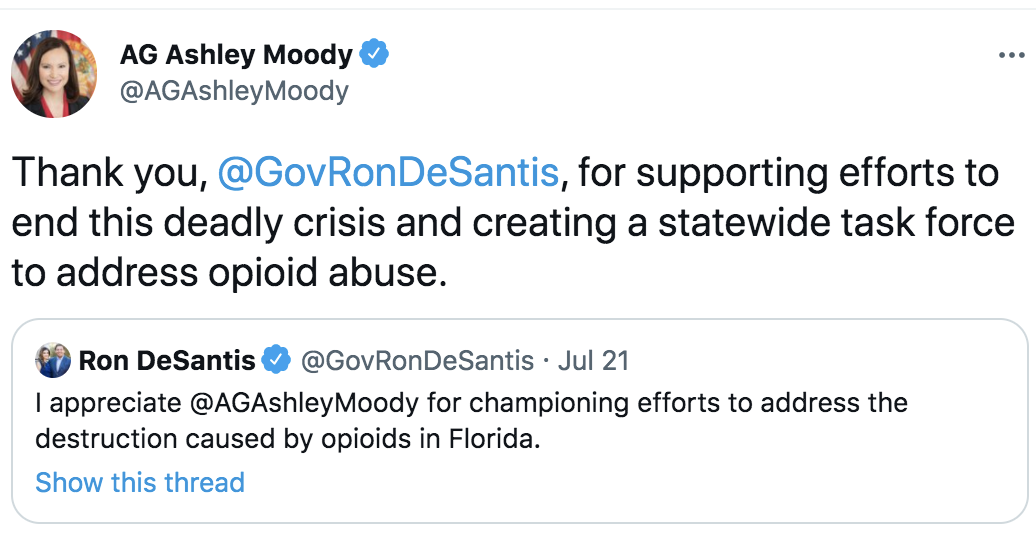 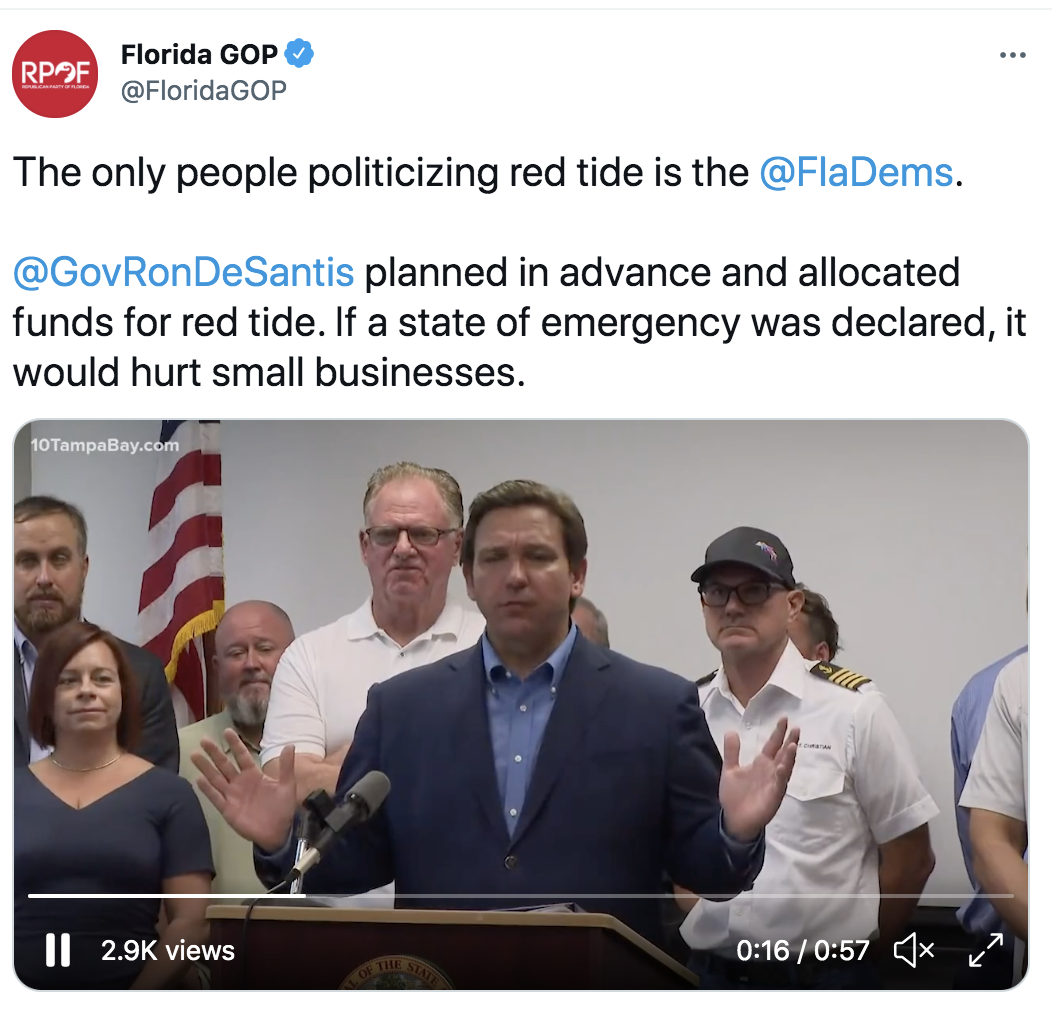 Make sure to follow @FloridaGOP and retweet and share. The Republican message must be spread around the state and you are integral to making that happen!