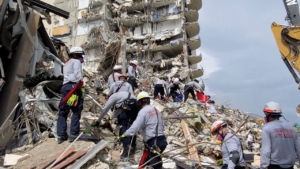 We remain the United States of America

While the Left endeavors to divide this state and country at every turn, seeking to paint America as a hopelessly divided nation, the horrific tragedy at Surfside shows that is just not true.

The unity we have seen among every race, gender and creed in the greater Miami area after this horrific event is a symbol of the best of America. From first responders to the health care community to local charities to churches to neighbors, there has been unity in response to this calamity.

This is an important message to Floridians and all Americans as we celebrate the birth of our nation 245 years ago. We are still the United States of America. And we will always fight to remain so.

In that spirit of unity, Governor DeSantis announced Wednesday that federal, state, local, private sector and nonprofit partners have come together to create SurfsideStrength.com, an emotional support and assistance platform for survivors, families, first responders and others impacted by the tragedy in Surfside to receive much-needed support to persevere.

There are currently more than 440 first responders and state workers on-site to support ongoing search and recovery efforts. To read the full efforts of the state response click here: https://www.floridadisaster.org/news-media/news/20210630-governor-desantis-launches-surfsidestrength.com-to-provide-support-for-survivors-families-and-first-responders/

As part of this year’s Fourth of July celebration, former President Donald Trump will be holding a Save America rally in Sarasota July 3. The event will be held at Robarts Arena, 3000 Ringling Boulevard, Sarasota. Doors open at 2 p.m. The first speakers will begin at 5 p.m. and President Trump will speak at primetime 8 p.m. Immediately following his speech will be fireworks at the Fairgrounds, where Robarts Arena is located.

Join us to celebrate America’s birthday with President Trump by clicking here: https://secure.anedot.com/florida-gop/sarasotarallyvip

The RPOF encourages those who are attending the rally to generously contribute to the victims of the tragedy at Surfside.

Most of the new laws that passed the Legislature this year and were signed into law go into effect today. Here are some of the highlights of what the Republican-led Legislature accomplished for Florida this year.

The state budget, which includes money for Everglades restoration and the effects of sea-level rise; raises the minimum pay of state workers to $13 an hour; provides bonuses to first responders; and adds $50 million to raise teacher salaries.

Big Tech crackdown. A new law bans social media companies from removing political candidates from the companies’ platforms. Companies that violate the prohibition could be fined $250,000 a day for statewide candidates and $25,000 a day for other candidates. (A judge has issued a temporary injunction on parts of this law.)

School vouchers will be expanded. Building on one of the strongest voucher programs in the nation, the new law increases the family income threshold for children to qualify for vouchers — allowing more families to qualify, and removes a requirement that students had to previously be enrolled in public schools.

Moment of silence. This new law will require public schools to hold moments of silence each day. Teachers are prohibited from suggesting any particular purpose but are to encourage parents to discuss this with their children.

Civic education. This new law requires high-school U.S. government courses to include “a comparative discussion of political ideologies that conflict with the principles of freedom and democracy.” It also requires public schools to create civics-education curriculum to develop “an upright citizenry.”

Protecting women’s sports. This new law bans transgender females (biological men) from participating on girls’ and women’s high-school and college sports teams. It is designed to protect the women and provide equal opportunities for them.

Online taxes will finally be collected. Requiring out-of-state online retailers to collect sales taxes on purchases made by Floridians the same way that in-state retailers must is an issue of fairness. The estimated $1 billion a year in additional revenue will be used to replenish the state’s unemployment trust fund drained due to Covid, and then go toward reducing the commercial rent tax.

The condition of Florida’s child welfare system is about to improve as Governor DeSantis has signed two bills that will help children find permanent homes more quickly. These bills were a priority for Senate President Wilton Simpson, who was adopted as a child at the age of 6.

“Governor DeSantis has been a strong partner as we work to improve Florida’s Child Welfare System, and I appreciate him signing this key legislation into law,” Simpson said. “We know the earlier in life we can give a child a permanent living situation, the better off that child will be in the long run. Government is a horrible parent, and childhood is way too short for any kid to spend years waiting in limbo bouncing from home to home.”

Senate Bill 80, sponsored by Sen. Jason Brodeur, who was also adopted as a child, prioritizes finding children a permanent place to call home, particularly before they turn 18. The second bill, SB 96, will improve reporting standards in the case of abuse and neglect.

Trump Speaks at Save America Rally in Sarasota
Scroll to top