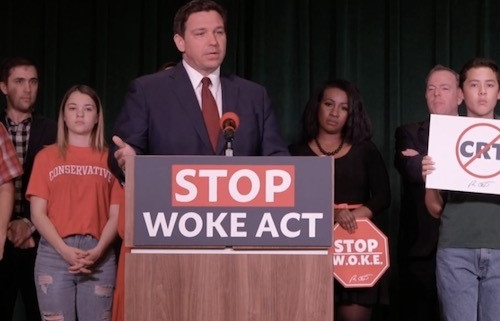 Governor DeSantis announced the Stop the Wrongs to Our Kids and Employees (W.O.K.E.) Act, a legislative proposal that will give businesses, employees, children and families tools to fight back against woke indoctrination.

The Stop W.O.K.E. Act will be the strongest legislation of its kind in the nation and will take on both corporate wokeness and Critical Race Theory. Today’s proposal builds on actions Governor DeSantis has already taken to ban Critical Race Theory and the New York Times’ 1619 project in Florida’s schools.

“In Florida we are taking a stand against the state-sanctioned racism that is critical race theory,” Governor DeSantis said. “We won’t allow Florida tax dollars to be spent teaching kids to hate our country or to hate each other. We also have a responsibility to ensure that parents have the means to vindicate their rights when it comes to enforcing state standards. Finally, we must protect Florida workers against the hostile work environment that is created when large corporations force their employees to endure CRT-inspired ‘training’ and indoctrination.”

Lieutenant Governor Jeanette Nuñez has a particular disdain for the woke culture and the need to fight it. “As the daughter of Cuban exiles who fled from Marxist ideology, I am proud to stand alongside Governor DeSantis and support this proposed legislation that will put an end to the wokeness that is permeating our schools and workforce,” she said.

Chris Rufo, Senior Fellow and Director of the Initiative on Critical Race Theory at the Manhattan Institute, is perhaps more responsible than any other single person for unmasking the pervasiveness of the woke poison in schools and corporations. And he strongly supports what Governor DeSantis is doing as a model for other states.

“In the last year they have accelerated critical race theory in K-12 public schools and they have done something that no government should do, step between parent and child,” Rufo said. “Governor Ron DeSantis is not only protecting all of the employees and students in the state of Florida. He is providing a model for every state in the United States of America. Critical Race Theory is wrong; it offers nothing to improve the lives of anyone of any racial background.”

Protecting Floridians from illegal aliens being shipped to Florida

Governor DeSantis continues efforts to stop the flow of illegal aliens being brought into Florida, and to protect Floridians from the ongoing border crisis created by President Biden.

The Governor announced proposals for the upcoming legislative session that will hold accountable private entities that knowingly or recklessly assist the Biden Administration in resettling illegal immigrants into Florida. The legislation would also strengthen E-verify enforcement and codify and build upon the steps he has taken to protect the state of Florida through executive orders. Additionally, Governor DeSantis announced that the Department of Children and Families (DCF) published an emergency rule to prohibit the issuance or renewal of any license to house unaccompanied alien minors who seek to be resettled in Florida unless there is a cooperative agreement between the state and federal government.

Congressman John Rutherford of Jacksonville, where the Biden administration has been transporting illegal aliens under cover of night, joined the Governor at the announcement.

“This crisis at the southern border is not the result of a failed policy from the Biden Administration — it is their policy,” Congressman Rutherford said. “The decision to move illegal immigrants into Jacksonville threatens the lives of folks here in Northeast Florida. Enough is enough. I’m thankful that Governor DeSantis is putting the safety of Floridians first and is fighting back against the Biden open border agenda.”

“I am grateful that the Governor has not wavered in his efforts to keep Florida safe and in his support for those men and women on the front lines working hard at it every day,” said Jacksonville Sheriff Mike Williams.

Governor DeSantis has offered Florida’s support in response to the deadly tornadoes that struck nine states over the weekend — and hard-hit Kentucky took him up on the offer.

Over the weekend, the Florida Department of Emergency Management coordinated with the emergency management offices of the nine affected states to identify resource gaps and offer support as needed. The State of Florida has resources and experience dealing with weather disasters, including emergency management personnel, Urban Search and Rescue Teams, ambulance strike teams and recovery disaster specialists. The State of Florida also proactively offered assistance for any mutual aid requests.

“The devastation left in the wake of the tornado outbreak over the weekend is an unthinkable tragedy, and Casey and I are keeping the victims and all impacted individuals in our prayers as initial recovery efforts begin,” Governor DeSantis said. “The State of Florida has been communicating with our partners in the impacted states since early Saturday morning and we stand ready to provide any assistance needed during this time.”

Workforce education gets another boost

Governor DeSantis announced nearly $11 million in funding for the 2021 Pathways to Career Opportunities Grant and Apprenticeship State Expansion Grant recipients. This funding is part of Governor DeSantis’ efforts to make Florida the best state in the nation for workforce education by 2030.

Including these most recent grants, more than $30 million has been invested since 2019 to expand registered apprenticeship and pre-apprenticeship programs. This creates opportunities for individuals to earn the high-value skills and nationally recognized credentials necessary for high-earning careers, and support our growing industries and globally competitive economy.

“By investing in career training and apprenticeship programs, Florida is expanding opportunities in a way that will strengthen key sectors of the economy,” Governor DeSantis said. “Through this program, we are offering alternatives to the traditional, and expensive, brick and ivy education experience and helping Floridians obtain good jobs without going into debt.”

Demings admits she doesn’t have a message for Florida

Watch Demings admit she has not figured out her message: https://www.youtube.com/watch?v=QOvb5ZE5SyA

AG Ashley Moody was on Fox Business’s Varney and Company discussing Florida’s efforts to fight crime. In Florida, The AG and Republican leadership are working diligently to ensure prevention of mass theft, and to support our law enforcement officers.

Florida governor Ron DeSantis on Monday called for legislation to block contractors that help fly illegal immigrants to Florida from doing business with the state.

“They’ve done over 70 flights in the last six months, dump people here. And we had—a few weeks ago—one of those people that Biden dumped, ended up committing a murder in northeast Florida,” DeSantis said in an interview on Fox News’s The Ingraham Angle. “Our view is, if they’re going to be dumping, we want to be able to facilitate transfer to places like Delaware, and, so, we have $8 million in my new budget to be able to do that.”

DeSantis said he is seeking to pass legislation to ban contractors who work with the Biden administration on these flights from doing business with the state government.

“We are going to pass legislation that says if you are facilitating Biden’s policies—which is effectively a mass human smuggling operation—you are not going to be able to do business with the state of Florida or other local governments,” DeSantis said.

Freedom Thursday – Christian Judeo Foundation of our Country and Our ...